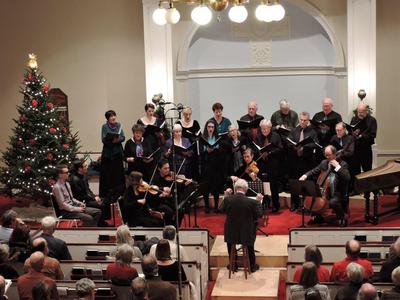 A bird’s eye view of Handel’s Messiah from a past performance.

For the first time in three years, music lovers will be able to hear a live performance of Handel’s all-time favorite, Messiah. On Saturday, December 10, at Blue Hill’s First Congregational Church, Blue Hill Bach will join forces with Baroque Orchestra of Maine (BOOM) at 7 p.m. to perform the work’s Christmas selections. Under the direction of conductor George Emlen, a small ensemble of some of the area’s finest Baroque musicians will perform using Handel’s original instrumentation, according to a press release.

“We’re especially pleased to collaborate with BOOM in this concert, and to welcome George Emlen—who is so well-known and highly regarded—as conductor,” said Blue Hill Bach Executive Director Marcia Gronewold Sly, in the release. “We’re all very excited to share this holiday tradition again after such a long hiatus!”

The cast of soloists will include sopranos Jennifer Bates and Michele Corbeil, altos Catharine Cloutier and Lori Sitzabee, mezzo-soprano Marcia Gronewold Sly, tenor Aaren Rivard, bass John David Adams, violinist Heidi Powell and trumpet player Jack Burt. In keeping with Baroque practice, the soloists will also perform as members of the Blue Hill Bach chorus. In what has become a Blue Hill Bach tradition, the audience will be invited to join in singing the “Hallelujah” chorus at the end of the evening.

Drawing on the wealth of talent in the region, Blue Hill Bach and BOOM bring historically informed performances of Baroque music to Downeast Maine. BOOM’s mission and tradition is to engage and educate a wide audience in rural Downeast Maine about Baroque period instrument performance by presenting concerts in accessible, eclectic, non-traditional concert venues.

Blue Hill Bach has received strong support from the community for its programs, with sold-out audiences, an active volunteer board and funding from individuals, businesses and foundations. Blue Hill Bach has received grants from Early Music America and the Maine Arts Commission for outreach programs, and from the Maine Community Foundation for a children’s chorus, capacity building and the Marville Young Artist Fellowship. The fellowship, which was instituted in 2013, offers emerging young musicians opportunities to learn about Baroque performance practice by working with established performers.

Admission is by advance reservation or at the door. Students under 18 attend free. Audience members will not be required to wear masks but are asked to bring them to wear if they join in singing at the end of the concert.