Blue Hill
Originally published in Island Ad-Vantages, May 26, 2022 and The Weekly Packet, May 26, 2022
Repaving in and around Blue Hill
A look at current and upcoming roadwork 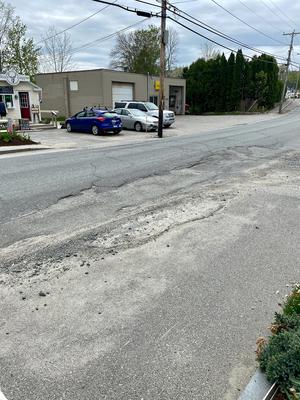 Initial, limited road construction in and around Blue Hill’s commercial center began on May 16. Drivers will note signage near both the Blue Hill Fairgrounds and the Blue Hill Wine Shop. Another stretch of road being worked on is the area of Route 15 where it intersects with Route 175 in Sedgwick.

In an email, Paul Merrill, Communications Director for Maine Department of Transportation, confirmed that the work on Route 15 “is a cyclical pavement resurfacing project. The project limits are from the Deer Isle Bridge to the Sedgwick town line and should be done by the end of June.”

Merrill also shared information about the paving work under way on Route 172 being done by MDOT maintenance crews. “That work area begins at the intersection of Route 15 and goes north for a little more than 2 miles” and should be finished in July.

“They do that work pretty fast,” said Butler Smythe, Blue Hill select board member. “Disruptions will be minimal at best.”

Smythe cited a larger concern—“fixing the mess outside the post office,” noting that maintenance work is set to begin in mid-June on the area of road between Hammond Lumber and Blue Hill Garage. “They’re going to have to dig up the road because a pipe has collapsed. That’s scheduled for June, but these things are always subject to delays, so that [start date] could slide a week or two.”

Consider alternate routes to access Blue Hill center: Mountain Street to Pleasant Street on one side of town and Beech Hill Road to Route 177 on the other. Smythe said that detour signage will be posted.

Smythe offered insight as to the need for ongoing road work. “Tenney Hill wasn’t even paved until the 1960s, and I think a lot of plumbing went in there at that time that’s now aging out. It’s a hill, and water comes down a hill. We’re constantly battling erosion underground that you don’t see.”

Some roads are town-owned and others are under MDOT jurisdiction, so timelines might not always match up between the two entities. Smythe indicated that something residents can expect this summer is steady above-ground roadwork due to peninsula-wide fiber internet installation.

“There’s going to be bucket trucks on all the roads all summer long. Hopefully that will not impact everybody too much. It’s just the way it is.”

With an eye on keeping the public informed as to ongoing and developing roadwork—particularly with the busier summer months fast approaching—Smythe is working on getting the Blue Hill Facebook page updated and regularly managed, and his hope is to have a better sign in front of the town hall soon to provide timely information.

He suggested that community members visit bluehillme.gov and sign up to receive regular email updates. A red banner on the site’s homepage invites visitors to sign up, and the process takes seconds.

‘There’s going to be bucket trucks on all the roads all summer long. Hopefully that will not impact everybody too much. It’s just the way it is.’