This past weekend saw the return of Island Heritage Trust’s annual Wings, Waves & Woods Festival, a celebration of birds and birding, with more than 20 events offered at locations throughout Stonington and Deer Isle May 20-22. After taking a two-year hiatus due to COVID-19, the nonprofit organization once again invited the public to learn from area birders, horticulturists, herbalists, sea captains and other subject matter experts through walks, talks, boat rides, meals and more.

According to Noel Ruth, who joined IHT earlier this year as Outreach Manager, the festival has historically been a way to generate excitement and elicit participation before the full summer tourist season begins. Said IHT Executive Director Julia Zell, “Part of the initial impetus for the event was to bring in people during the shoulder season to support local businesses.”

Zell said that the event has been going on for well over a decade, with more than half of the participants repeat attendees and a healthy percentage (50 to 60 percent is Zell’s estimate, though IHT’s post-event survey will offer specifics) coming from away.

Though a handful of events required preregistration and a fee to attend—ticketed activities included boat cruises, “Birds Eye View” flights and Saturday night’s dinner—the majority were free with no reservations necessary. A donation of $5 per person per event was recommended to cover operating costs.

The festival’s first in-person activity was geologist Ann Hooke’s guided tour through the Settlement Quarry in Stonington on Friday, May 20. Hooke shared the history of the famed Deer Isle Granite. (Of some celebrity note is that former First Lady Jackie Kennedy chose the granite specifically for the Kennedy Memorial honoring her late husband and late brother-in-law due to her affinity for the pink feldspar that runs through the granite, imparting a rosy tone.)

Hooke began her talk with scientific charts showing graphics of the area’s geologic history, walked participants through time as she pointed out areas of “glacial striation and glacial polish,” and shared historical and scientific tidbits throughout—all while periodically pointing out bird sightings.

Following Friday afternoon’s happy hour welcome at IHT headquarters, Val Libby, former Temple University Professor of Landscape Architecture and Public Horticulture, gave a talk entitled “Planting for the Birds.” The informative discussion by the Blue Hill resident included a slideshow illustrating native plants, trees and shrubs to consider in order to invite pollinators and support local birds. The talk ended with a brief Q&A and then some audience members headed off for that evening’s “Night Flight Tour.”

Early birds on Saturday, May 21, had their choice of two bird walks on Deer Isle. One of these, led by Downeast Audubon President Leslie Clapp, inspired Zell. “I went on a walk at Scott’s Landing. While our mission at IHT isn’t wildlife conservation specifically, seeing the birds, seeing their habitat and seeing how many people showed up feels really affirming for our broader mission of land conservation. This is really important,” she said.

Saturday morning’s offerings continued with additional bird walks. Then, after being grounded for the morning, participants could take to the air for a “Bird’s Eye View” flight or to the sea with the lighthouse cruise. Zell was especially excited about afternoon story time with Captain Garrett Aldrich on the Isle au Haut mailboat Otter. Aldrich read Maine children’s book author/illustrator Chris Van Dusen’s The Circus Ship.

“We’re trying to include more events like that,” said Zell. “It was a community effort and local families could feel like the event is for them.” Saturday concluded with a dinner featuring keynote speaker Laura Suomi-Lecker.

Sunday’s roster included additional bird and nature walks and the Pelagics and Puffins Cruise. In sum, said Zell, “The whole festival in general has felt really optimistic. Gathering together again and celebrating these things that are really important to us. It was really nice.” 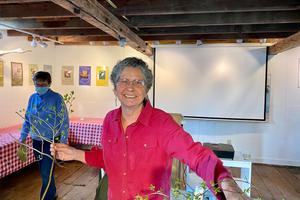 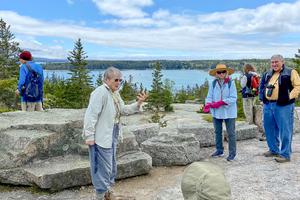