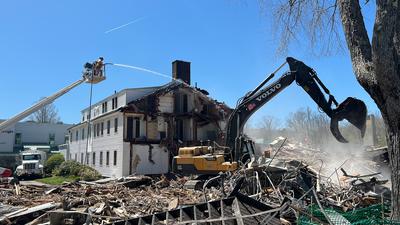 Piles of debris are swept aside during demolitition work earlier this month at Northern Light Blue Hill Hospital.

With the first phase of demolition complete on the existing Northern Light Blue Hill Hospital and construction set to begin on the new facilities, hospital president John Ronan’s priority is community safety.

“Safety is a top concern of ours. That’s why we have safety fences up. We’d just like to remind the public to be aware and to not enter into the construction area,” said Ronan in a recent phone interview.

Along those lines, Ronan stressed that the easiest way to access the hospital campus continues to be through the Parker Point Road entrance as the Water Street entrance will remain closed for the time being.

Though updates will be posted to the hospital’s website as needed, the public should note that Parker Point Road will be the entrance to use “throughout construction of the new hospital, for the next year,” said Kelley Columber, director of communications for Northern Light Health. “The nice thing is that we won’t be switching that up, it will remain constant,” she said.

Columber added that they are now in the process of removing debris from the site and echoed Ronan’s call for safety. “A fence has been erected around the site to ensure the safety of our patients, visitors, and employees.”

Though she lamented the need to clear some trees from the site, Columber said that she was pleased to report that only one of the three elm trees on the front lawn area had to be removed.

The project is thus far keeping to its original timeline. “The good news is that we’re right on time. We’re early into things, but we’re on budget and expecting to have the hospital ready to move into in May 2023,” said Ronan, who also noted that he’s not concerned about the inevitable increase in summer traffic, as long as people are remaining aware and staying safe.

For her part, Columber is thrilled. “We’re super excited about this project…to live in such a small, unique little coastal town and the fact that we’re going to have access to a brand new, high tech emergency department and a brand new hospital. That’s amazing.”