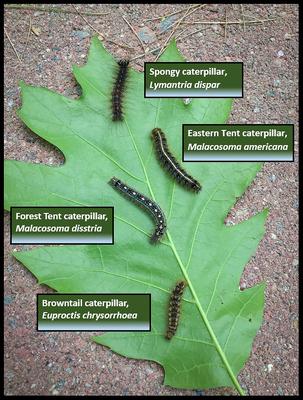 Four common caterpillars you may see around your home. The browntail has characteristic orange dots.

The springtime scourge of browntail caterpillars enters a new stage at this time of year as the bugs have grown to full size and are now spinning cocoons, according to Charlie Armstrong at the University of Maine Cooperative Extension Service.

So you may notice fewer of the caterpillars on walk-about. Instead, start looking for their cocoons on your house, decks and trees, advises the Maine Department of Agriculture, Conservation and Forestry website.

Unfortunately, the toxic and irritating fine hairs of the browntail persist in the environment long after the caterpillars disappear, Armstrong says.

Also, avoid working in infested areas in dry windy conditions because the wind may cause the hairs to become airborne. It may be advisable to wear masks or respirators to keep from inhaling the fine hairs.

In July and August, the mature moths take flight and reproduce. They lay eggs on the underside of leaves. The eggs hatch into small caterpillars that will overwinter in their their characteristic webs at the tips of branches in apple, oak and other trees, according to the state websites.

Browntail moths overwinter as caterpillars, which gives them a quick start at devouring leaves in the early spring. Many other moth species overwinter as eggs and so lag behind the browntail, says arborist Bill Burman of Orrington.

Not all caterpillars that we see are browntail, and not all tents in trees are browntail either, Armstrong says.

The forest service and extension service websites have more information about identifying the nests and the caterpillars.

In other pest news, ticks are present in typical abundances, says Griffin Dill of the extension service. There may be a few more of the small deer ticks being submitted to the lab this year, he added, but not a lot more.

Deer ticks are of concern because they can carry tick-borne diseases like Lyme disease.

Last year, there was a super abundance of dog ticks in spring and early summer, he said. Dog ticks are not known to carry pathogens that cause disease in humans, Dill said.

There have been spotty reports of lone star ticks in Maine, Dill added. They do not yet have a growing endemic population in Maine, he said, but are likely hitchhikers on migratory wildlife or even domestic animals.

Lone star ticks can cause a curious meat allergy in humans if they bite, Dill said.