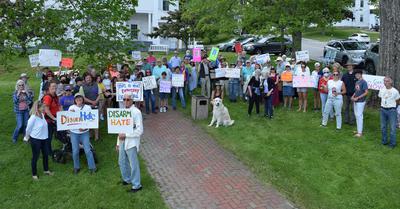 Participants stand together in a “U” shape to honor those killed in the Uvalde school shooting, during the June 11 March for Our Lives Rally in Blue Hill.

On June 11 at noon, community members gathered on the lawn in front of the Blue Hill Town Hall for a March for Our Lives rally. The purpose of the event, which was organized by area residents Bec Poole, Dee Powell and Midge Valdes, was to motivate people to speak out against gun violence, thereby prompting elected officials to work to change policies regarding gun access.

According to Valdes, the Blue Hill rally was one of eight such events happening in Maine, and one of 450 that were happening on Saturday nationwide (marchforourlives.com). Asked about her hopes for the day’s outcome, Powell said, “Just for people to think about it. We’re pretty complacent here in Maine….We don’t need to feel unsafe, but we do need to pressure politicians to do something.”

Powell was clear that this is not a matter of being pro- or anti-guns. “Hunting is a way of life that is honorable. But we don’t need weapons of war to be in the hands of civilians,” she said.

Age limits and the value of change

As things got under way, many attendees held up hand-painted signs while organizers passed out fliers containing the names and contact information for key elected officials. From the microphone set up on the steps, Valdes welcomed everyone and shared her reasons for involvement. “I woke up the day after the Uvalde massacre with a broken heart….Will we again forget?”

She went on to say that the gun laws in Maine are “considered to be weak by any standard” before introducing doctors Bob Holmberg and Joan McCracken, who took to the microphone together. Sharing that gun violence is now the #1 cause of death among children, Holmberg asserted that there is “no room for assault rifles in this country.”

McCracken noted that rental car agencies “had it right” as they historically do not rent cars to anyone under the age of 25. She supported this assertion by stating that human brain development is not complete until a person is in their mid-twenties and anyone younger than that should thus not be permitted to purchase firearms.

Next up was Dud Hendrick, a member of Veterans for Peace, who introduced himself as being “not your standard-issue military veteran” and spoke about the need for change. “You’ve got to own it and value change for human survival…the dominant culture of this country is a violent and toxic one.”

He shared the statistic that 45,222 people were killed by gun-related injuries in the United States in 2020 (confirmed by the CDC at cdc.gov/nchs/fastats/injury). As Hendrick said that he is “enraged, profoundly sad, and wallowing in despair” about the proliferation of gun violence, a shout was heard from a truck driving by the event. “God Bless the second amendment” was yelled from the moving vehicle.

Brooksville-based artist Rob Shetterley opened his address by saying, “If there’s a background check that needs to be done, it’s not with the kids who are buying AR-15s, it’s with the country itself.”

Met with considerable applause, he went on to quote James Baldwin and ended with a bald declaration of his emotional state: “I’m feeling at this moment very sad, very angry, but also very determined.”

Ralph Chapman, former Green Party member of Maine’s House of Representatives, concluded the day’s speakers. Reading out the words “what can I do?” four times, placing emphasis on a different word in each subsequent reading, he answered the question with a suggestion that doing a little bit often is better than doing a lot infrequently.

The rally’s coda was a group march from the town hall to the consolidated school “in somber silence.”